This month our adventures took Rick and me to Kitch-iti-Kipi (The Big Spring) near the City of Manistique, Michigan.  The spring is 45 feet deep and full of bait-fish and large Brook, Brown, and Lake Trout. The spring flows at over 10,000 gallons per minute and sustains a 45-degree temperature all year.

There is a boat hooked to a cable that visitors can take out to the middle of the pool of water to view the fish and bubbling spring. It’s amazing to me that the water is so clear you can see through the 45-foot depth and watch the spring bubble up through the bottom. 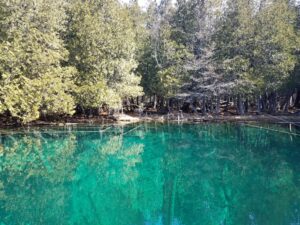 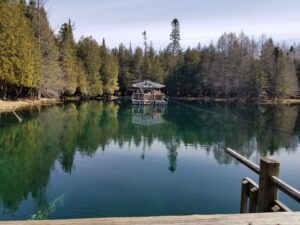 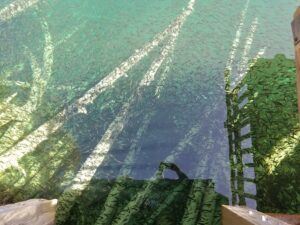 I’m still plugging away at DESTINY RECLAIMED, book #2 in the Preserver & Protector series. The pre-order is up and ready for some on-clicking😊

I’m so flipping excited to get Jack’s story out into the world and Jack is too.  You see, Jack wants his story told so you understand why he did what he did to his son, Blake. He fears the readers of Time WARped (book 1 in the Preserver & Protector Series), are angry with him because he didn’t properly prepare his son for his role as a Preserver, causing Blake to somewhat flounder in Time WARped until he got his bearings. But Jack is a good guy and had a good reason for doing what he did, or shall I say didn’t do, and he needs you to know it.

Jack is normally calm and reserved, but lately, he’s been relentless and on me constantly to type faster and get his story out. I can’t tell you how many times he’s knocked me out of a deep sleep at 3:00 a.m. begging me to get out of bed and into my office to type. He can’t understand what is taking me so long. I keep telling him to calm down because I got this, but you know men, they can be impatient.

Well, August will be here before we know it and you’ll be able to find out Jack’s big secret then.