Bookbub Deal of the Day!

I’ve got your Bookbub DEAL OF THE DAY!

~~To prove his undying love and loyalty, he’ll risk sacrificing her trust.~~ 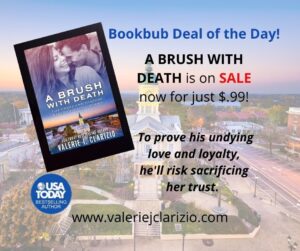 Need some convincing?  Check out these reviews:

Totally got enthralled in the plot of this book. What a great murder mystery story, that incorporates family values, and love as well. Main characters Ben and Cori are strong characters that both work thru personal struggles. The plot was very interesting and kept my attention throughout. I was begging for more at the end of the book. Very good story line and kept my attention throughout the book. Loved the book!

I was given an ARC of this book in exchange for an honest review and I honestly loved it. While it is the second in a series, I was able to read it with no problem even though I haven’t read the first one. It was well-written with wonderful and believable characters. I truly enjoyed this book and will be getting the first one so I can catch up on the series. I highly recommend this book.

This is an entertaining, steamy, well-written, fast paced romantic suspense novel with likable, engaging, mature characters. It has intrigue, small town and family drama, a captivating mystery, a heart-warming romance, and a happily ever after ending.