Time WARped (A Preserver & Protector Novel) is ready to hit your e-Reader, bookshelf, nightstand, wherever you prefer! 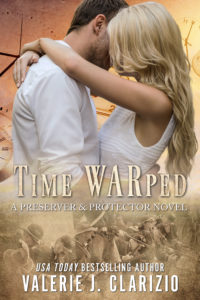 I had so much fun writing this book–Blake and Ariel’s story. When I began writing I never imagined I would pen a time travel romance, nor a book with historical war elements, yet, here it is and I couldn’t be more excited about it!

Tag Line: Romancing destiny one moment at a time.

Need some convincing?  Here’s some reviews:

Well-written with characters you’ll love to get know, this book is a wonderful read. It’s intriguing and keeps you engaged through to the end. I was drawn into the story as I went through everything with Blake and Ariel. The time-travel aspect is thrilling keeping you aware of the butterfly effect where one little change can affect everything for years to come. That’s where the Preservers come into play. I enjoyed this book immensely and am really hoping there’s another book to come. I highly recommend Time WARped.

Time travel, the butterfly effect, protectors and preservers of history as it was originally played out–or was it? If you’re a fan of the Back to the Future film trilogy, you’ll appreciate how this book takes a mind-bending dive into pivotal American war events as they pertain to one particular family tree and its valorous and not-so-valorous branches when dark forces conspire to change the past and influence the future.

Engaging, mature characters in a fast-paced, steamy love affair across time and place add to a story celebrating America’s veterans. Memorial Day anchors the events and anchors Blake and his family line. I applaud the author for her research into history and the mind-boggling mechanics of time travel. This is clearly the start of a series because without preservers and protectors, history is always in danger of being altered. An enjoyable and thought-provoking read. I received an ARC from the author, but this is my honest opinion.

Thank you for your support!

Valerie J. Clarizio is giving away an ebook copy of MISSING OUT ON LIFE to one contest winner!