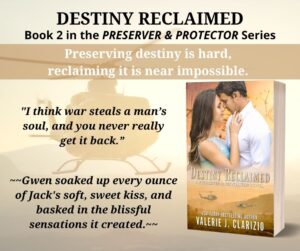 𝐏𝐫𝐞𝐬𝐞𝐫𝐯𝐢𝐧𝐠 𝐝𝐞𝐬𝐭𝐢𝐧𝐲 𝐢𝐬 𝐡𝐚𝐫𝐝, 𝐫𝐞𝐜𝐥𝐚𝐢𝐦𝐢𝐧𝐠 𝐢𝐭 𝐢𝐬 𝐧𝐞𝐚𝐫 𝐢𝐦𝐩𝐨𝐬𝐬𝐢𝐛𝐥𝐞.
𝐃𝐮𝐭𝐲. 𝐂𝐨𝐮𝐫𝐚𝐠𝐞. 𝐁𝐞𝐭𝐫𝐚𝐲𝐚𝐥. 𝐒𝐞𝐥𝐟𝐥𝐞𝐬𝐬𝐧𝐞𝐬𝐬. 𝐃𝐞𝐬𝐭𝐢𝐧𝐲.
Jack Cornelis’ life is planned. Complete his tour of duty in Vietnam, intact. Return home. Marry his sweetheart and have a family. But, the powers that be have other ideas for him. Like his ancestors, Jack is a Preserver. When duty calls, he’s whisked back in time to preserve his family’s decorated military record while his thieving relatives attempt to steal the Cornelis heroism to hold as their own.
Gwendoline Tebon happily marries Jack when he returns from war. But her jubilance is shattered when her twin brother is killed in action.
When Gwendoline discovers her husband is a time traveler who can change history, she begs him to go back and save her brother. He refuses. The Gods forbid Preservers to alter history, they are only to preserve it. Gwendoline is so distraught, it threatens the life of their unborn child. Jack gives in. But his slight change to history causes undesirable consequences in present day.
Jack scrambles to find a way to set the record straight before the new destiny takes hold and spirals completely out of control. But, can he? Is the new destiny now permanent and their idyllic life forever gone?
Amazon / Barnes & Noble / Kobo / iBooks / GooglePlay / Universal Link
Need some convinicing?
Advance Praise:
~~Tracey~~This is a well-written, entertaining, steamy, historical time travel romance. It is a real page turner with likable, engaging characters, a heart warming romance, small town charm, an unexpected twist, and a happily ever after ending. It is a wonderful tribute to the amazing men and women who serve our country in the military. It is the second entry in Ms. Clarizio’s outstanding “Preserver and Protector” series, and can easily be read and enjoyed as a stand alone, but is even better when read after reading “Time WARped”. I am looking forward to reading the next entry in this series with great anticipation.
~~Jeannie V.~~This new book from Valerie Clarizio was the second book in the “A Preserver and Protector Series”. This book was definitely a page turner and I found I could not put it down! I needed to know what was going to happen next!
The characters were so well described that I could visualize them. Jack and Gwen’s romance flowed through the book and I enjoyed following their romance, even in some tense moments.
Like his ancestors, Jack is a Preserver and he can be taken back in time to preserve his family’s military history. When Jack’s father informs him that he cannot carry on as a Preserver and it will be Jack’s job to do so, it gets interesting. Jack does not fully understand initially, but that changes quickly.
I had not read a Time-Travel novel in the past. I really have to say I enjoyed the time-travel concept as well as the history discussed in this story.
I would recommend this novel ! It can be read as a stand alone, but I am going to make sure I read the first book in this series too!