Missing the Point by PJ Fiala

I’m so excited to release Missing the Point for so many reasons.

First and foremost, this is a series I’ve thought about for a long time.  You see, my father’s parents were both born and raised in Kentucky.  My grandfather came from a very poor family and on top of that, his father divorced his mother when he was very little, about 2 or 3.  Divorce today isn’t thought of in a negative way, back then it was horrible.  My great-grandmother did remarry and the man she married, took my grandfather as part of the package, but the stigma remained.  As a result, my grandfather lied about his age as a 16 year old and joined the Army.  He wanted a new beginning and he was willing to do what it took to find it.  The thing is, he’d met my grandmother before hand at a church dance and he didn’t want to leave her behind.  He went to boot camp and as soon as he could come back, he did, and he married my grandmother, but they’d need to leave Kentucky.  Grandpa stayed in the Army for many years, and after leaving the Army, my grandparents settled in Missouri.  My grandmother went back to Kentucky every year to visit her sisters and brothers and their children, my grandfather only went back periodically, the bad memories just couldn’t be erased, no matter the situation.

As a result of my grandmother going back each year, as I got to be a bit older, I got to travel with her to Kentucky and spend several weeks.  I remember those times fondly and they’ve ingrained in me a sense of family, easy times and a long-ago world.  Now, as an adult, I go back as often as I can to visit my father’s cousins and my cousins.  My dad’s cousin, Janet Sue, still lives on the family farm my grandmother grew up on and visiting there is such a treat for me.  So, as a result, I always knew I wanted to write stories that took place in Kentucky.

Secondly, my friend and fellow author, Stephany Tullis created Chandler County with me and this was truly a labor of love.  We knew from the beginning we wanted to invite other authors to write in Chandler County with us, so we could share this world with them and all of our readers.

It is with great pride and pleasure that I release my first book in Chandler County, Missing the Point.  This book is the first of my books in Chandler County but certainly not the last.  Sam McKenzie is an Army veteran who has finally retired after 25 years.  He and three of his friends have started Bluegrass Security in the little town of Bourbonville, one of two towns in Chandler County.  As the Kentucky Derby nears, the over-flow of people coming to Chandler County brings with it trials and tribulations and as the locals deal with these and other scenarios, we get to know many of the residents in Bourbonville.

Stephanie (Stevie) Jorgenson is a detective in Chandler County.  Though she comes from a wealthy ranch family, she made her own way in the world and followed her dreams.  Keeping Chandler County safe is her top priority.  When she meets the handsome security specialist from Bluegrass Security, there is an immediate spark and the two succumb to the attraction, but neither believes anything more should come of it.  Life, circumstance and intrigue follow the pair as they are thrown together time after time dealing with some terrible situations in Bourbonville.

I hope you’ll enjoy Missing the Point and the books of my fellow authors in Chandler County. 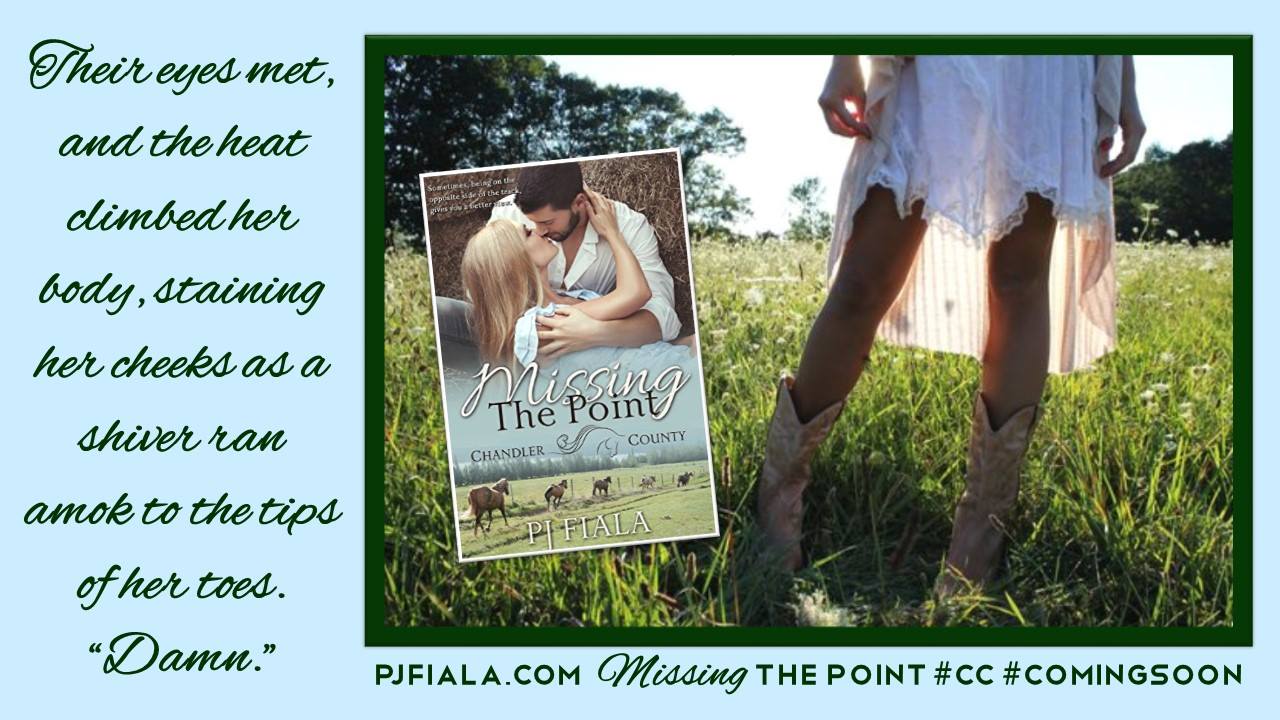