You may have seen on my Facebook page a little over a week ago that I reported I was going to be interviewed by Hannah Murray from The Book Show on TRE – Talk Radio Europe. TRE is Spain’s only English speaking talk radio network.
The interview did happen, and though I sound a bit dorky, I’m posting the link to the show anyway in case you want to listen.
A bit about Hannah: Hannah Murray has been presenting The Book Show for over five years, and has interviewed some fantastic authors including James Patterson, Sebastian Faulks, Jeffrey Archer, Wilbur Smith, David Baldacci, and Lee Child, AND now VALERIE CLARIZIO!
During the show, Hannah and I discussed my book, A BRUSH WITH DEATH, the second book in my Crime and Passion Stalk City Hall Series.
Here’s where you can listen to the replay. It’s an hour long show but my part doesn’t start until about 43.15 in.  She must have saved the best for last. LOL
https://www.talkradioeurope.com/the-tre-bookshow-tres-hannah-murray-catches-up-with-top-authors-to-discuss-their-latest-releases-27-01-21/
#valsontheradio #romancenovels #romancesuspense
#love #romance #divorce #ex #crime #passion #seriesOn #trebookshow
@radiohannah 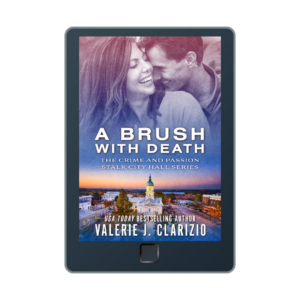