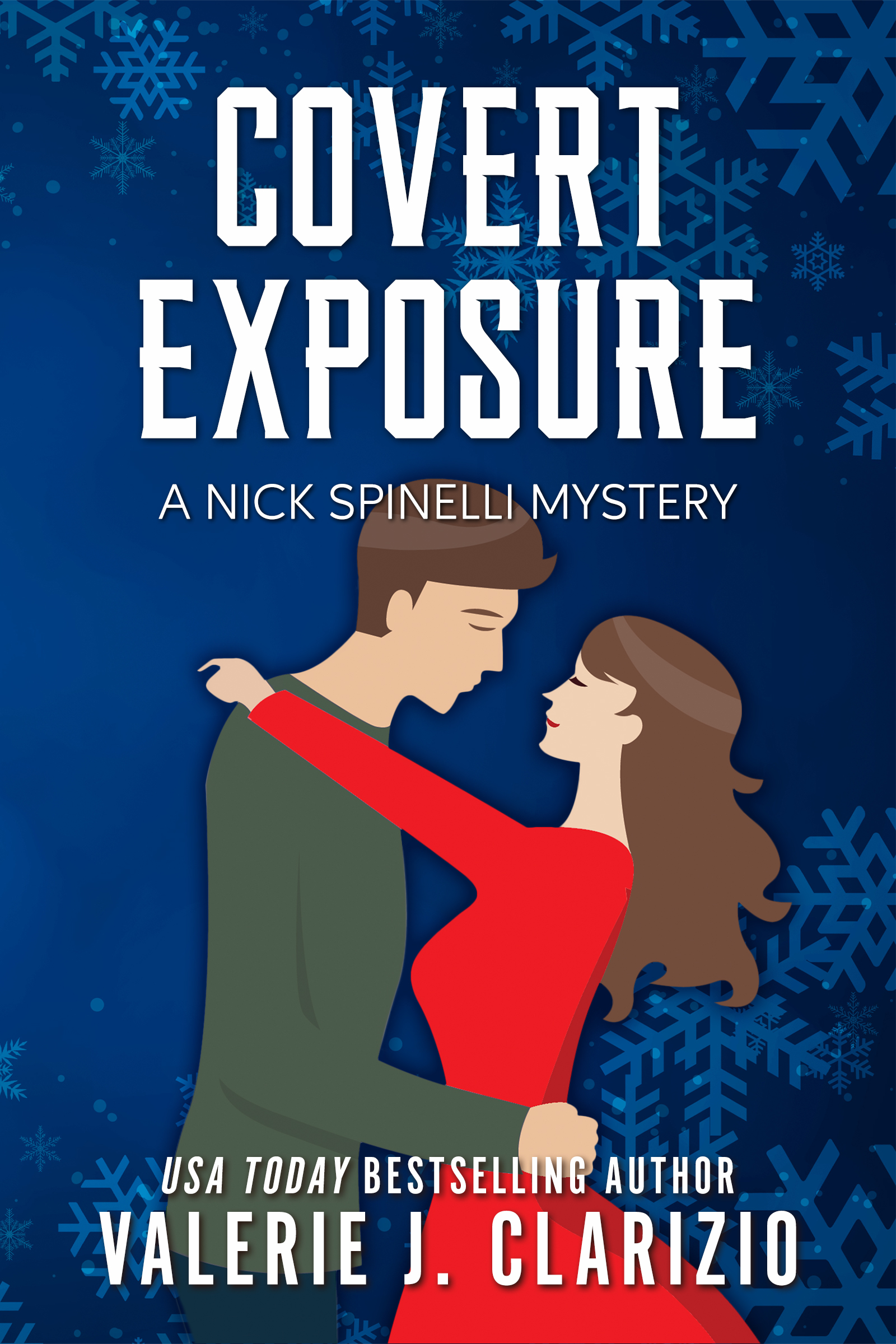 He’s a hardened homicide detective.
She’s a do-gooder social worker.
When their worlds collide, more than murder is exposed.

Detective Spinelli’s life is tossed sideways when he is reassigned from the Homicide division to assist in the Child Services division of the Social Services Department for the holiday season.

Caseworker Shannon O’Hara moonlights as Santa Claus’s little helper at the mall, and when Santa and an elf turn up dead, she appears to be next on the killer’s list.

Spinelli and Shannon are forced to work together to solve the murders and keep Shannon from becoming the next victim. The trouble is they have wildly different philosophies about dealing with clientele and how best to solve these crimes. Their unwanted attraction to each other triggers additional stress for the two. Will Spinelli be able to complete his job without losing his heart?

He dipped his head and pressed his lips gently to her bruised cheekbone. She sighed and then tilted her head to the side giving him better access. Her cheek felt warm and soothing to his lips. He eased his kisses over to her mouth. Her incredible scrumptious lips met his. Though he wanted more, he worked to keep the kiss light. He worried that if he rushed her she’d back off. He figured her for a much slower pace than which he was accustomed.

It took every bit of strength he could find to end the kiss. He took a step back. Pulling his gaze from her proved even more difficult. It was as though she wouldn’t release him. She ran her tongue across her lips. Did she do that on purpose? He decided if she did it a second time he would deem it intentional, and would kiss her again. But this time he would kiss her like he wanted to in the first place, deep and long. He would explore her lovely mouth, every ounce of it. He stared at her beautiful mouth, waiting. She stared back.

He knew he needed to end this. If he stayed another second he wouldn’t be able to control himself. The depth of his desire for her scared him. He cleared his throat. “Good night, Shannon. I’ll see you tomorrow morning.”

He turned and took a step before she spoke. “Wait,” the desperation in her voice was unmistakable.

He spun around. She stepped toward him, reached up, wrapped her arms around his neck, and pulled him toward her. She pressed her soft moist lips to his. Her lips parted, inviting him in. His tongue caressed hers, slow, and controlled at first, but not for long. She met his quickening pace. She wove her fingers through his hair. He clasped his hands around her waist and pulled her tight to his body. Shock, pleasure, and heat spread through him like wildfire. He kissed her deeper, harder, wetter, and longer. He explored every ounce of her mouth absorbing her sweet flavor. His heart raced. He slid his lips from her mouth to her jaw, to her neck. She tilted her head back. A soft groan escaped her lips. He whispered her name and all of a sudden, as if hearing the sound of her name slapped her back into reality she pulled herself from him and stepped back. She looked confused.

He stepped toward her, and she stepped back.

“Are you okay?” Spinelli asked.

She threw her hand over her mouth and shook her head.

Spinelli raised an eyebrow. “Did what, kissed me?”

Spinelli went out on a limb. “Well if it’s any consolation, I didn’t mind,” he teased, trying to lighten the moment.

He fought the urge to smile.

“Didn’t you like the kiss?” Judging from her initial response to his kiss, he was confident it was safe to ask.

She shifted her eyes to her feet.

She lifted her gaze and met his. Her chest rose as she sucked in a breath. “It doesn’t matter if I did or didn’t, it’s not going to happen again.”

He stared at her, speechless, convinced his ears had deceived him. They’d perhaps just shared the most intimate sensual kiss of his life. Was it possible she could kiss like that and not mean it? Was she afraid, and if so, afraid of what?

His mind raced for something to say. He came up empty. He inched toward her, and reached for her. She stopped him with her hand. “It’s just not going to work. We’re two very different people. I’m sorry,” she stammered.

Spinelli stood in the hallway, dumfounded. In silence, he watched as she turned and entered her apartment, shutting the door behind her. That’s it. A crater the size of the Grand Canyon filled his chest where his heart used to be.

Valerie J. Clarizio has written a very nice book. Covert Exposure (A Nick Spinelli Mystery) is a pleasant, light-hearted romance-suspense. I think the theme is good and like how the author neatly combines the social work segments into the mystery. It had a natural approach, and she was not hesitant to make her characters show their true feelings. Readers will get a brief, but effective glimpse into the operations of Social Services. I like Nick a lot and think he has a great sense of humour, especially when he is with Shannon, who was too emotional, although nice. The dialogue was unforced and contained sufficient wit at times. Covert Exposure is not too violent or graphic. It is a short, fast-paced story that’s quickly read.

Spinelli has had a tough day.  First his mentor and father figure retires and then he is reassigned to the Child Services department.  But, the bright spot in his day is when he meets his partner, Shannon O’Hara.  His bright spot quickly becomes dark when they can’t seem to work together.  The more they fight and hate each other the more they start to feel for each other.  When the Santa and an Elf that Shannon works with at the Mall are found dead she is soon dragged into a case that Spinelli is working.  The closer Spinelli gets to both the killer and Shannon the tougher it is for him.  Can he manage to find the bad guy before they find Shannon?

I really enjoyed this book.  Spinelli was a fantastically fun character.  It wasn’t just Spinelli though.  The story was a great story that unfortunately we could possibly find in the newspaper.  That aspect alone gave this story a level of realism.  With the realism, the fun characters and the spicy love story between Shannon and Spinelli join together for a great book.  I am so glad this is only the first book in the series because I can’t wait to read the next book.  I definitely enjoyed the book, the characters and the story.  Valerie Clarizio did a phenomenal job and she has found a fan in me.

Review by Raven of the Reviewing Vixens

Cookies for Santa by Valerie Clarizio is a Romantic Suspense that takes us to the time of giving in the Christmas season, but not everything is as it first appears.

Detective Nick Spinelli’s partner has just retired and he’s now at loose ends. He’s a solo cop in Homicide with no new partner in sight. Unfortunately his boss decides to lend him out to the Child Services division. He doesn’t handle children well, not in the least, but the “green eyed angel” he’d be more than glad to get his hands on. Well, right up until the moment she takes a hate for him, then it’s nearly all out war.

Shannon O’Hara is a case worker for the Child Services division of the Social Services Department. Because of the holiday season things around the office are even more stressful and busy. What she doesn’t need is a cop with a chip on his shoulder and major attitude. Not in the job she has to do, not when there are children are involved.

But there’s a lot more going on, most of it revolving around Shannon’s weekend gig as an Elf for Santa at the mall. When the man playing Santa and an Elf turn up dead, things get all the more complicated between her and Nick Spinelli.

This is a great little story; the tension between them could practically be cut with a blade. They need one another and yet are constantly fighting each other at every turn. The author keeps the heat turned up on high between them from the moment they meet until the very last page. A great addition to anyone’s shelf.

Diane Courtney  Way to go girl!!!!  I finished your book last night and am hoping you are working on your next one.   You definitely have the talent for writing.  I am a huge fan of Debbie Macomber and Susan Mallery and you seem to have that same flare/style of writing.  Hope you continue to pursue this dream and keep writing, just let me know when the next one comes out.  I am now an avid fan.

Darla Tong  Cookies for Santa has all the ‘ingredients’ – sugar, spice, romance, suspense – all you need to add is a cozy fireside and a mug of your favorite holiday  beverage and you will have the perfect reading experience. I think the author  should start a contest of suggestions on who should be cast as the leading  characters in the movie someday. Fun!

The Reading Reviewer/Mary Gramlich Valerie Clarizio has written a wonderful story with amazing characters and an  interesting turn of events you just never see coming. Christmas is all about  surprise and this book shows what happens when you unwrap a great one.

Maddie Cochere / Author of the Susan Hunter Mystery Series Whether it be the friction between Shannon and Spinelli when they first meet or
when they first kiss, there are plenty of sparks in this entertaining romance suspense novella. The characters are easy to care about and root for,
the writing is solid, and the mystery/suspense is well done. A very entertaining first book from Valerie Clarizio, and I’m looking forward to the next one!

Aubrey Wynne - I love Nick Spinelli!   A goody-two-shoes social worker is partnered with a tough, thick-skinned detective. Nick Spinelli is hot, sexy and funny. He ries unsuccessfully to use his usual wit and charm to win the girl. He strikes out. He dons a Santa suit. Bingo. But the suit brings more trouble than just the girl. The story has the flavor of the old 1950’s detective movies but modern day.  I would have preferred more action (great scenes at the end) but I’ll look forward to that in the next book. Spinelli’s character was spot on and well-developed. Hopefully we’ll get to know Shannon better in the sequel. I heard a third is coming out this year. I love Clarizio’s style and look forward to seeing how she progresses with this series.