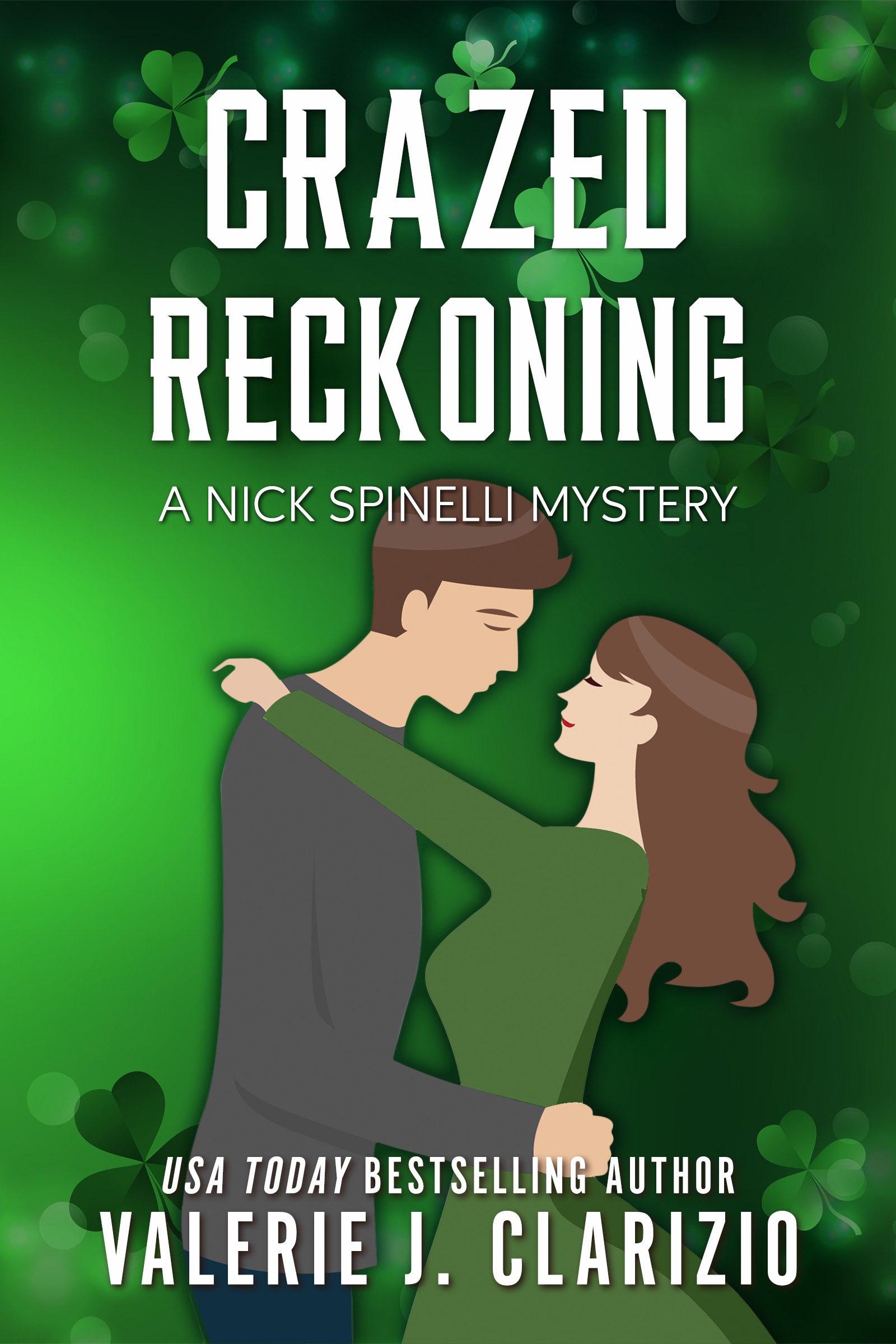 He’s an alpha detective on a mission to claim his love interest.
She’s fighting for her freedom.
With Spinelli at her side, will Shannon beat this decades-old family feud?

After experiencing a murderous Christmas and Valentine’s Day with his love, Shannon O’Hara, Detective Nick Spinelli assumed Saint Patrick’s Day couldn’t be any worse. He should have known better.

While out on a geocaching adventure in Door County, Shannon and her friend Anna find more than they bargained for in the cache box.

When Shannon disappears, Spinelli is sent racing to find her. Amidst the chaos of an unruly Irish celebration, and a decades-old Irish family feud, he must rescue her from the hands of a madman.

Spinelli hadn’t wanted to worry any of Shannon’s family until he knew more details, but perhaps it was time to call her Uncle Bernie in Milwaukee. Shannon and Bernie were close. Maybe he could help.

Bernie answered his cellphone so quickly Spinelli swore he had been waiting for him to call.

“Yeah, hi Bernie. Sorry, I know it’s early but do you by chance know where Shannon is?”

Spinelli tried to wait out the agonizing, uncomfortable silence. He could hear Bernie breathing, so he knew he hadn’t been cut off. “Bernie?”

“No. I don’t. I’ve been trying to reach her myself but she’s not answering her cell.”

“She’s not answering my calls either.”

“Last I knew, she was going to Door County with Anna for some geocaching thing.”

“Yeah, we’re in Door County now looking for her.”

“Me, Walker and Marsh are in Sturgeon Bay looking for Shannon. I received a strange call from her yesterday about 3:30. We got cut off and I haven’t been able to reach her since.”

Something clunked. Did Bernie drop his cellphone?

The sound of wood scraping against wood resonated into Spinelli’s ear canal; shattering glass followed. “What have you done to her, you sawed off little runt?” Bernie growled.

“Nothing. I didn’t do anything,” exclaimed a high-pitched adult male voice.

“Bernie … Bernie,” Spinelli yelled into his phone. It was no use. The man had obviously dropped his phone.

Spinelli shrugged and shook his head, his phone still pressed to his ear. The sound of shuffling feet echoed through the line, followed by a thud.

“Where is she, you little prick?” Bernie’s voice sounded even angrier than a moment ago.

“I don’t know. I haven’t seen her … really. Just put me down and we’ll talk about this,” the unfamiliar voice pleaded.

What in the hell? “Put me down,” Spinelli repeated. Did Bernie just pick up some guy? Christ, he’s sixty-some years old. Who is this guy? And why would he have done something to Shannon.

It sounded like a sack of potatoes had dropped to the floor.

“Ouch, seriously? Was that necessary?”

“Nobody. Just an old family friend.” Before Spinelli could question Bernie further, Bernie began his own line of questioning. “Tell me about this strange call from Shannon. What did she say?”

Spinelli debated his response. Should he let Bernie in on the details? At this point, they needed all the help they could get.

Spinelli expelled a breath. “She called me from one of the cache locations. She was pretty worked up. She told me she and Anna found a finger in the cache box.”

“A real finger?” Bernie asked. His tone didn’t seem all that surprised.

“I see. By chance, Nick, was there a gold Claddagh ring on that finger?”

Did he really just ask me if a severed finger had a ring on it? How would he know? “Yes.”

Something clunked, feet shuffled. “You little son of a bitch! I’ll wring your scrawny neck. Where is she?”

“Ouch. You just bit me. Men don’t bite. What are you, some sort of animal?”

Spinelli pulled his cell from his ear and stared at the screen. “Dammit!”

“I’m not sure, but I don’t like it.” Spinelli put the phone on speaker so they could all hear the fight on Bernie’s end. “He knew about the ring on the severed finger.”

“How on earth did he know that?” Marsh asked.

“That’s what I’d like to find out. And evidently the person with Bernie knows Shannon and may know something about the finger.”

“What’s happening? Who are you with? And how did you know about the ring?”

After sucking in a couple more quick breaths, Bernie cleared his throat. “I’m guessing the finger belongs to my dad, Shannon’s grandfather.”

“I thought your dad was deceased?”

“Let me get this right. You’re telling me your dead father’s finger showed up in a cache box in Door County, over forty years after your father died.”

Cowgirl USA – I really enjoyed this third Spinelli book. It had a great mystery, dark humor (you can tell from the cover) and action. Shannon is a social worker, involved with the sexy Nick Spinelli. They have been through the mill together and just as both of them think their lives will slow down, Shannon turns up missing. I don’t want to give too much away but I loved the intricacy and authenticity of the Irish feud that becomes the center of the plot. Watching Spinelli plow through the St. Patrick’s Day festivities while trying to rescue his woman is pure entertainment. This is a must-read for anyone who loves this Irish holiday and a good romantic suspense.

Harlie’s Books, a different review blog – A mystery, suspense, dark humor, romance, a sexy cop, a red-headed heroine and an Irish feud, plus kidnapping.  Yep, I’m there.  I just wish that I had read the first two books in the series, just because I love Nick and Shannon so much.  They are fun couple that just has had the craziest holidays EVER!!!!  Don’t worry about reading the books in order.  I wasn’t lost at all but at the same time, I want to read them just because…
How I loved Nick.  I don’t have but one book boyfriend, Noah Clayborne courtesy of Julie Garwood and her Buchanan series, Nick is coming in a close second.  He had from the beginning.  Sexy, a true man’s cop and extremely protective of Shannon.  Much in love is he but will he realize it before it’s too late?  He’ll do anything to protect Shannon but this time he has much to fight through to save her.  Oh yes, he is like the knight in shining armor and in this book Ms. Clarizio makes in swoon worthy, not eye rolling.  Again, I need to read the other mysteries…just because.
Shannon is your typical Irish lass and smart, sexy and devoted to Nick.  What woman wouldn’t be at this point?  Unfortunately for her, she is the biggest pickle and doesn’t quite see a way out of it without some sacrifices.  Swoon.  Let’s not forget that according to some back story, she has been through a lot since meeting Nick and I would have to say this is my only grip with the book.  Three holidays…three mysteries…three near death experiences…Let’s give the kids a night off just because they deserve it.
Don’t get me wrong, I LOVE the mystery and suspense in the book.  Much to figure out with twists coming that you don’t see coming and a conclusion…WOW!!!  But seriously, I would love a short something where it’s just the two of them without all the doom and gloom.    But then again, it wouldn’t be a Nick and Shannon story without all that in it.  That’s half the fun of this couple.  They wouldn’t be a couple if NOT for it all.  Plus, the secondary characters are well drawn and only add to the couple.
I was surprised at the length of the book.  Before I knew it, the book was over.  *sniff*  It was a quick read, but the pacing worked.  Great characters make this book and series work.  I LOVE series that follow the same couple throughout.  I love watching their relationship grow and sometimes falter but in the end they are there for each other.  The smexy times are there and well though out.  😉  *sigh*  Again, Nick is the man.
Run, don’t walk and pick up this book but ONLY if a swoon worthy, knight in shiny armor and an Irish lass row your boat.  Plus, the mystery and suspense, too.  Two of Harlie’s favorites.  Nick and Shannon are definitely in the top 3 of my all time favorite couples…EVER. 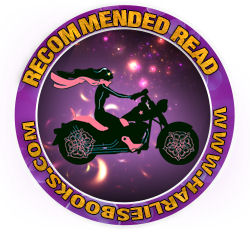