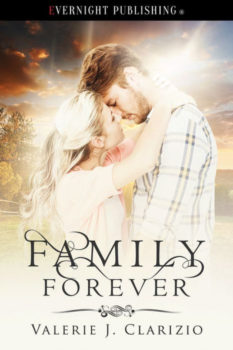 The death of Dylan’s parents leave his five younger brothers and the family dairy farm in his care.

Neighbor Marissa, raised by an alcoholic father, seeks a way out. Desperate for help, Dylan offers her a live-in nanny/housekeeper position. She jumps at the opportunity. The chaotic household, full of love, feeds her maternal instincts. She falls for Dylan and the boys.

When Dylan finds himself desiring Marissa, he pulls back. His heart has been broken in the past by women resistant to a large, ready-made family. But if she walks away, she’d not only break his heart but those of his brothers, too.

Will Dylan ever believe in Marissa’s devotion to his family, risk his heart, and those of his brothers, for the woman he loves?

Marissa placed her small, warm hand to his cheek. “I can’t believe you’d believe or say such a thing. You are the most caring and devoted person I ever met. You care for these boys as if they were your own. They know how much you love them and they couldn’t possibly love you more. You are the best thing that has ever happened to them.” She paused, sucked in a deep breath, and let it out slowly. “And you are the best thing that ever happened to me. You took me in, no questions asked, and let me become a part of this wonderful family, and for that, it is I who am truly blessed.”

His heart thudded in his chest. He tried to pull his gaze from hers, knowing that if she kept looking at him like she was he’d kiss her. And without a doubt, one sweet taste of her lips and he’d need to do more than just kiss her.

She stared at him like she was waiting for some response, but the emotions running rabid through his body prevented him from forming any coherent thought whatsoever. But he was saved, he didn’t have to think. He only needed to respond as she leaned toward him and pressed her soft, slightly open lips to his. He had dreamed of this day for so long, imagined how her lips would feel against his, and how she would taste. It was a good thing he was sitting down because the overwhelming heavenly feeling slamming though his body would have probably knocked him on his butt.

Dylan wrapped his arms around her and pulled her tiny body onto his lap. He inched his lips back from hers and lost himself in the depths of her ocean-blue gaze.

He cupped her milky white cheeks in his hands, then he eyed her kissable lips. Did he risk another taste? He knew the answer to that question. He was already gone, already hers, had been for some time now but had just been too stupid to act on it. Not any longer. It was time let himself go. He wanted her, no, needed her as much as the very oxygen he breathed.

The stairs were not the place he wanted to resume this with her so he rose to his feet with her in his arms. Though he wanted nothing more than to cart her off to his bed, he willed himself to take it slow, and took a seat on the couch, her on his lap, straddling him. He stilled for a moment to realign his thoughts. This was Marissa. He wanted to handle things correctly. He loved her and didn’t want to screw it up, and more importantly, he wanted to make sure she was truly ready. He was all in and wanted to make sure she would be as well.

He leaned toward her and brushed his lips across hers. She parted her lips slightly, drawing his tongue into her warm, moist mouth. Her sweet flavor seeped into his tongue and then filled every cell in his being. He kissed her long and softly. Her lips stayed on his, matching his every move as if she’d already kissed him for a lifetime. Their tongues danced together as if they’d composed the melody together in a past life. Her slim fingers wove through his hair, and she pulled his head more tightly to her. Instinctively, his tongue dove deeper into the unexplored depths of her mouth. He probed desperately, seeking to absorb every bit of her flavor. His arms tightened around the small of her back as he pulled her toward him, the soft curves under the sweatshirt she wore pressed firmly to him. It crossed his mind to remove the cloth barrier between them but that wouldn’t coincide with the take it slow idea that was quickly being replaced with the no better time than the present theory. His logical brain was losing the battle to his illogical body.

Minutes later, Marissa pulled back and stared at him with those bright blue eyes that always caught his attention. Her lips looked puffy. A red hue bordered them. Her normally pale cheeks were flush.

Her gaze stayed on him as her shoulders rose with the deep breath she took, and then fell when she let it out. “I’ve wanted to do that for the longest time.”

He pulled her to him again and kissed her long and slow, then heated, wet and hard, only coming up for air so often before starting the process all over again. Who needed sleep? He could do this all night.

It was still dark outside when Dylan’s eyes popped open. He glanced at the living room wall clock. The boys would be waking soon. It was a school day.

Marissa’s head rested just below his chin. Her silky strands of hair smelled like a refreshing spring morning and felt soft against his neck. Her small warm hand lay on his chest. Her breaths were slow and even. It felt so right to have her lying in his arms. Though they hadn’t made love, he felt completely satisfied. She gave him exactly what he needed last night. Support, comfort, love, and understanding, just the nourishment he needed to regroup and face another day. If he felt this good just from kissing and holding her he couldn’t begin to imagine how he’d feel once he made love to her, the woman he loved. 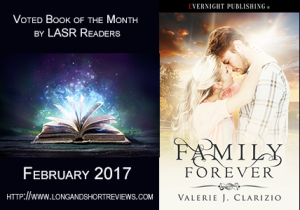 5 Stars from Long and Short Reviews – LASR – Family Forever was also voted as book of the month! Review excerpt: Family is so important in a person’s life. Family does not always have to be blood. I loved the pace of the story. Not too fast or slow. With Dylan’s brothers and the rest of the characters that came into play, I think the author did a great job of not only pulling me in but she made me feel. Overall a great book with a romance and a climax that will either make you smile or cry happy tears. An easy recommend.  http://www.longandshortreviews.com/book-reviews/family-forever-by-valerie-j-clarizio/#comments

5 Stars from P Leslie – A truly heartwarming book, with realistic yet down to earth characters, who capture your heart. I smiled, laughed, and enjoyed the simmering yet intense connection between Dylan and Marissa. A beautiful story and I thoroughly enjoyed it. I’m definitely adding Valerie to my favourite author list… https://www.amazon.com/review/RP6BDYP6I2BIM/ref=cm_cr_dp_title?ie=UTF8&ASIN=B01M9FZAPR&channel=detail-glance&nodeID=133140011&store=digital-text

5 Stars from Carolyn – Just adored this book! Your heartstrings are tugged on both sides. First you have this family of boys that are left alone after a tragic accident with their parents and are now being raised by a gentle, sweet man, Dylan, that devotes himself to his brothers, yet still finds time to think of and do for others. Marissa is the daughter of the town drunk and is shunned by most of the town… https://www.amazon.com/review/RTPC9DNU79WPH/ref=cm_cr_dp_title?ie=UTF8&ASIN=B01M9FZAPR&channel=detail-glance&nodeID=133140011&store=digital-text

5 Stars from Christine Campbell –  The end is awesome you may need tissues… https://www.amazon.com/review/R2LLCL7H3UK6N/ref=cm_cr_dp_title?ie=UTF8&ASIN=B01M9FZAPR&channel=detail-glance&nodeID=133140011&store=digital-text