Missing Out on Life 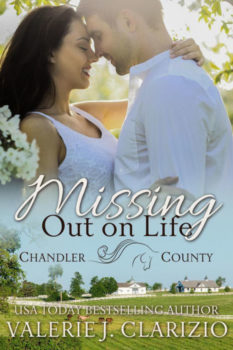 Jaded by the Past. Closed to a Future. Shocked by Unveiled Secrets. They Were Meant to be Together

Meredith Wellington receives a call that her sister has been murdered. Her two young nieces land on her doorstep. An instant family is the last thing she needs as she reaches for the top rung of the corporate ladder.

Jeremiah Crown, aka Coach, lives a simple life managing his family’s Kentucky horse ranch. When a damsel in distress decked out in a suit and spiked heels needs assistance, he’s more than happy to help, and happier still to realize this corporate powerhouse doesn’t recognize him as the man she’d deemed an enemy in high school twenty years earlier.

Once she realizes Coach’s identity, any chance of a romantic relationship disappears. When Meredith places her nieces low on her priority list, Jeremiah reconsiders his attraction to her. When danger comes calling, Meredith realizes this kindhearted veteran has the skill set to help her, if only she could set aside her pride to ask.

Can two people overcome past misunderstandings in time to thwart approaching danger?

Missing Out on Life Excerpt

The gate opened, startling Meredith. She pulled away from the horse, stiffening her spine, hoping nobody heard her talking to an animal.

Her heart hammered in her chest when Coach's dark-eyed gaze locked onto her. She'd expected to see Peyton with a report on her niece, but instead, the insanely handsome Jeremiah “Coach” Crown filled what remained in space in the stall. “Coach”? Why “Coach”? Where did that nickname come from?

Once he'd secured the gate behind him, he tucked his hands into his jeans pockets. He looked nervous—uneasy. Why? As a young man, back in school, he seemed to have enough self-esteem for twenty people. In fact, up until this very moment, she'd thought that part of him hadn't changed any in the past twenty years.

That broad chest of his inflated with the deep breath he drew. The black T-shirt he wore tightened around him, pulling taut around his bulging chest and abdomen muscles.

He let the breath out slowly.

"Are you okay?" he asked. His tone was soft and soothing.

She tried to answer, intending on lying, but the lump of failure in her throat blocked her lies from escaping.

His concerned gaze stayed glued to her.

"Is there anything I can do for you? I just want to help."

She burst into tears.

His arms flew around her, and he pulled her tightly to his warm, hard, but soothing body. She buried her face into his chest and held onto him as if her life depended on it.

With one hand, Coach held her close as he slid his other hand up and down her back in a comforting manner. "It'll be fine. Everybody just needs a little time."

"No. My God. She hates me," Meredith cried out.

"That's not true. She's just confused and acting out. You’re the person closest to her, so you're taking the brunt of it."

"No. She blames me for her mother's death. I know it because of some comments she's made about me not being there for her mom. And she's right. If I’d paid more attention to Anne, maybe I would have realized how bad things were, and I could have gotten her out of there. Iris's right. I'm the worst sister ever and the worst aunt ever."

Her knees weakened. Coach's grip tightened. He lifted her from the ground and carried her over to a hay bale where he sat with her on his lap. She buried her head in the crook of his neck. His hand brushed over her hair.

"You are not. You're a great aunt, and deep down, Iris knows it. As for Frannie—she loves you. I can see it in her eyes when she looks at you."

"Then why does she choose you over me every chance she gets?"

Meredith felt his hard swallow against her head. He knew her comment was true. She pushed against his chest but rather than let her go, he held her firmly and kissed her temple. Damn him.

Inhaling, she took in his rich scent. Woody with a hint of citrus. Damn him for that, too. He was just confusing her. He was supposed to be a jerk, but instead, he was being all nice and consoling her. Falling for a man she'd hated for so long was not in her plans. None of this was in her plans.

Coach swayed with her in his arms like one does when calming a child. "Meredith, can I propose this…I know you said you had work to do this weekend, but why don't you consider staying here a while longer today. Stay for the cookout. Then I'll come into the city tomorrow and watch the girls for however long you need. I can take them to the movies or the park—whatever they want to do."

Meredith lifted her head, holding her face only centimeters from his. "You'd do that for us…me? Don't you have plans…things you need to do?"

"Nothing I can't rearrange."

"I know. But if I give them something fun to do, maybe it will take their minds off things, especially Iris."

His gaze darkened. He leaned forward and pressed his lips lightly to hers, lingering only for a moment before he began to pull away. She reached up, curled her palm around the back of his head, and pulled him back to her. Her eyes closed when their lips met again. His kiss was soft, sweet, and enduring. The grief and anger she harbored melted from her. All she could feel was the pleasurable sensation of his warm mouth on hers.

Meredith sighed when Coach pulled away. Sitting on his lap, wrapped in the comfort and security of his hold, kissing those soft yet firm lips, was exactly what she'd needed at this moment.

"We should probably get up to the house. Dad's probably warming up the grill already."

"It's dinner time already?" Meredith asked. Good heavens, how long had they been in this stall sharing light, comforting kisses?

Valerie J. Clarizio is giving away an ebook copy of TAKEN BY SURPRISE, a novel set in a small town in the Upper Peninsula of Michigan (UP).