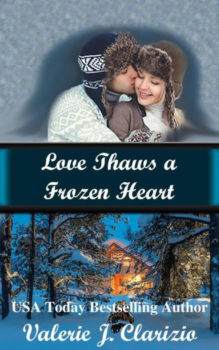 Casey is hell bent on getting Noah to sign divorce papers. Hiding out at his camp, Noah is hell bent on not signing. Procuring a snowmobile, Casey sets out in a blinding snow storm to find him. After crashing, she is near death when Noah finds her. Will a few cabin-bound days cause either of them to change their mind?

Casey edged toward him and pressed her lips to his, and he responded as she had hoped, with soft light kisses. It didn’t take long for his kisses to turn hotter, wetter and more passionate. He didn’t seem to be holding back at all, kissing her as if his life depended on her reaction. She’d be a liar if she said she didn’t welcome his growing hunger for her. His skilled lips knew just what to do, unleashing her desires, causing her to crave him more with each passing moment.

He pulled his mouth from hers and trailed light kisses over her jaw, down her neck and to the sensitive skin at the hollow of her neck. Her soft moan echoed in the small room. His hungry mouth returned to hers so quickly he swallowed the last of her sound. Their tongues danced in a knowing rhythm, as if this was nothing new to them.

Casey ran her hand over Noah’s thick chest and lowered it to his abdomen. His soft skin and firm ripples sensitized not only her fingertips but created a yearning in her core so strong she was already about to burst. And he had yet to really touch her. She draped a leg over him and continued downward with her hand. She wanted to touch him, feel his hardness.

His tongue dove deeper as his hands began to glide fluidly over her. God, how she wanted them on her breasts. Her taut nipples nearly cried out for his touch.

She eased her hand under the waistband of his shorts. All at once, he pulled his lips from hers and wrapped his hand around her wrist. Shock rippled through her. She stilled, waiting for some sort of further response or explanation from him. His eyes filled with panic. She actually heard him gulp. What was he afraid of?

Their gazes stayed locked. She wasn’t sure what to do or say, but the pain in his eyes was unmistakable and heartbreaking. He’d obviously been hurt in the past and feared being hurt again. Her heart went out to him.

“It’s fine. It’s okay,” was all she could muster as tears burned in the back of her eyes. Oddly, the tears weren’t generated as a result of being rejected by him. Rather, they were a result of the severe pain radiating from his eyes.

Casey lifted the covers and rolled away from him with the intention of returning to the couch. He snatched up her wrist. “Please, don’t go.”

Glancing over her shoulder, she caught his desperate, watery, gaze. “What?”

“Please, stay here with me for a while… I’d like to just hold you.”

The vulnerable look in his eyes nearly shattered her heart on his behalf and hers as well.  He looked as exposed as she felt. She eased down, and he rolled onto his back pulling her along with him. As she nestled in to the crook of his arm he took one of her hands in his, placed it on his chest and laid his warm hand over hers. His heart thudded against her palm. A familiar comfort blanketed her as he tightened his hold. She could get used to this.

Before too long, the daylight peeked through the light fabric of the curtain and somewhat lit the bunkroom. Casey opened her eyes to find herself alone in the bunk. The faint scent of Noah lingered in the bedding material, pleasantly teasing her nostrils, or perhaps tormenting. She wasn’t sure which. Though she would have liked to lay entwined in his sheets all day, preferably with him in the bed as well, she fought the urge to snuggle in deeper.

Valerie J. Clarizio is giving away an ebook copy of MISSING OUT ON LIFE.