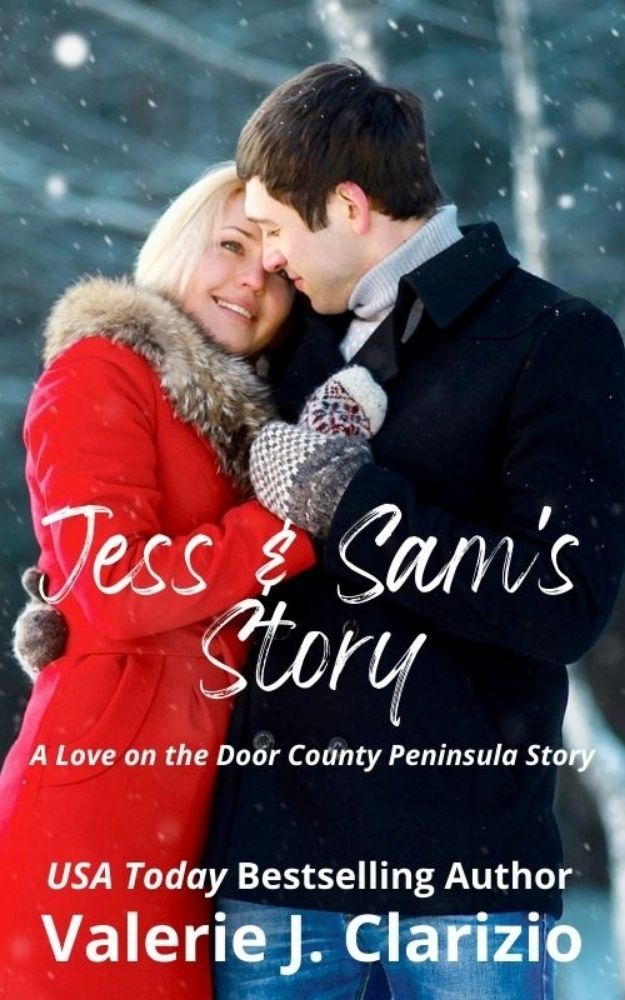 After twenty years, Jess returns home to care for her ailing mother. Close proximity to the man she once loved—who’d dumped her on the very day she expected a marriage proposal—reawakens her broken heart and strengthens her vow to never put faith in a man.

By his own choice, Sam’s the most elusive bachelor in town, his walls of defense firmly in place. But when the feisty little brunette he dated in high school and college moves back, Sam needs to step up his game, stiffening those walls to concrete. True love? A forever union? What kind of idiot believes in that?

No matter which way Sam and Jess turn in their little home town, they run into each other. And stumbling under the mistletoe isn’t what either one needs.

The frosty air slapped him in the face. Thank goodness for remote start. At least the truck wouldn't be freezing for Jess, who was already shivering. Sam opened the door for her and helped her up into the passenger seat.

Even though it was still early in the evening, the low clouds caused it to be pitch black outside. Luckily, the overly bright lights on the dashboard illuminated the cab enough that Sam could catch clear, quick glimpses of the beautiful woman sitting in the passenger seat. Her gloved hands rested on her lap. Sam fought the urge to reach over and take her hand. The need to touch her overwhelmed him.

The longer he drove, the thicker the awkwardness became in the air, making it difficult to breath. His mind reeled as to what to do when they got to her house. Should he walk her to the door? Go in? Kiss her goodnight? The urge to do all those things was strong, but uncertainty had him hoping the short ride would take forever so he wouldn’t have to make those decisions.

Sam pulled up next to Clint's truck in the driveway and shifted the vehicle into park. Jess made no move for the door handle. She sat statue-still, staring at the house. Sam could only assume she pondered her new situation—new normal. Her mother was no longer in there to greet her at the door.

A tear glistened as it slid down her cheek. For about the hundredth time since she'd returned home, his chest tightened. He was never going to make it through living in the same small town as her.

At her sniffle, he yanked up the center counsel and pulled her to him, right up and onto his lap. He wrapped his arms around her as she buried her face in his chest and cried her heart out. The pain seeping from her nearly brought him to tears.

She reached up and placed her finger over his lips but kept her cheek pressed to his chest. "Don't. Just hold me. Like you used to. I'm just having a terribly depressing day."

A lump formed in Sam's throat, and he tightened his grip.

A short time later she eased back, but remained on his lap. The tight quarters of the cab had her holding her face only inches from his. The pain in her eyes remained. It about killed him to know his holding her did nothing to help her. God, how he wanted to lean forward and kiss her senseless so she'd forget about the pain, if only for a moment’s reprieve.

Jess yanked her gloves off and placed her small, warm hands to his face. Her pleading eyes drew him closer until his lips touched hers ever so lightly, like a wisp of air. His heart raced. His body shook. He was done. He needed more, just like the other day when they'd shared that simple kiss under the mistletoe. In that moment, he knew he'd eventually lose the battle to let her remain free—free to find someone else who could give her what she wanted and needed, that lifetime commitment.

Sam hoped and prayed it wasn't her alcohol intake or need for comfort because of her mother's passing causing her to look him like she really wanted him. That thought picked at the back of his brain. Only a real jackass would take advantage of the situation.

Jess pressed her mouth to his again. A soft exchange of kisses led to Jess parting her lips, inviting him in. Still, he worked to keep it sweet and controlled, but that only lasted seconds. Her tantalizing tongue was too convincing. She needed more; he knew it, and so did he.

He pulled her closer and dove his tongue deeper into the warmth of her cinnamon-flavored mouth, but instead of burning a hole in his tongue like earlier, the remnants of Fireball seeping into his taste buds pleasantly heated his mouth, his heart, every cell in his body. He suddenly couldn’t get enough of that flavor.

Long, needy kisses turned hotter and wetter with each tick of the clock. Hands wandering, groping, and bodies pressing so tightly to one another they were almost one. Here they were, two adults in their mid-forties making out in the truck like teenagers.

Jess pulled back, and they both gulped for air. Her puffy, well-kissed lips still needed more attention in his opinion. Her emerald gaze bore into him and darkened as if she'd read his thoughts.

How had he let her slip away from him? What an idiot he was—stupid. So many years wasted. All because of one word—commitment. With as much as he'd hurt her, would she give him a second chance?

He could see the answer in her eyes, feel it in her touch.

Jess drew in a breath and let it out slowly. "Sam, come in with me."

Though his body begged him to, his brain cautioned him. Still, he flung open the truck door.