Here you go! Here’s the cover for the third installment in the CRIME AND PASSION STALK CITY HALL SERIES! 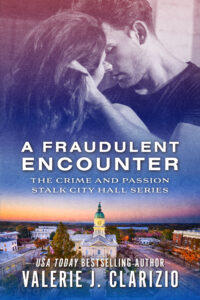 I’d love to release this book with some reviews. Are YOU interested in reviewing this book? Here’s the link to the ARC review interest form: https://forms.gle/NzgQxMXVsMHBRauU9

Municipal Treasurer Natasha Kane is a divorcee who has sworn off men.

Out of nowhere, love knocks, but can their relationship survive a financial fraud investigation?

A drug investigation turned deadly for Daxon Mertz. Witnessing the murder of his wife and unborn child, he left his big city job to become the police chief of a small town. Closing his heart, he threw himself into his work, to forget all he’d lost.

Divorcee, Natasha Kane lives with the small town gossips still whispering about her cheating ex-husband and the much younger woman he preferred. Building a wall around her heart to avoid further hurt and scandal, she fulfills her days as the finance director for the city and safeguarding taxpayers’ money.

When over a quarter of a million dollars goes missing from the city’s treasury, Dax finds himself investigating Natasha, the person with access to the treasury and most recently, his heart.

Feeling the hurt all over again at the betrayal of a man she loves, Natasha finds herself Dax’s prime suspect. What will the gossip mills say now?

How do they overcome suspicion, betrayal of the heart, and scandal?

Not up for reviewing but want to get your hands on it as soon as possible? You can pre-order it here:

To avoid more silence, and keep his idle mind from going down the rabbit hole it was about to in regard to if Natasha knew why he’d sought counseling, he asked, “How’s Cocoa?”

Her fidgety hands stilled, and she glanced at him. “My cat?”

“Yes. You mentioned him in a meeting not that long ago.”

“Oh, I’m surprised you remembered that. He’s a good boy. A little sassy, but good. Do you have a pet?”

“No. Not currently. I’ve had a couple of Labradors through the years. I had to put Winston down a couple of years ago. We…” We. A lump rose in his throat at the thought of his late wife. He choked down the obstruction. “I got him when he was just a pup and had him for fourteen years. He was a good, loyal companion.”

Was she referring to Winston or his late wife? Though he never spoke of Jillian, he was sure Natasha knew of her. Everyone at work did since it was noted when he first came to the job. But the question begged if she knew the story of how he couldn’t even protect her.

His heart seized. The tightening of his chest was unbearable.

He was the reason his wife was dead.

Dax gripped the steering wheel harder. Any harder and it would probably crumble.

A few minutes later, he pulled up to the curb in front of Natasha’s house. He quickly scanned over the neighborhood. Lights were on in some of the homes. Others were dark. This was a quiet area of town that rarely required police presence.

He flung his door open, and the interior light illuminated. “I’ll get it,” he said.

“No, that’s okay,” he heard her respond.

Ignoring her, quickly stepped around the front of the truck to her side. No way he wouldn’t see her to her door—to safety. Nothing was going to happen to her on his watch.

He opened the door for her and she slid out of the vehicle as she shouldered her purse. Side by side they walked on the narrow sidewalk toward her front door. The moment he placed his foot on the first of three porch steps the motion light turned on illuminating her entire postage stamp front yard instantaneously making him deeply aware of the position he’d put himself in. His pulse pounded, and sweat beaded on his temples even though the chilly December air washed around him. He—they—were on display for the whole world to see. If a neighbor looked out their window right now, or someone drove by, it would look like he brought her home from a date. The rumor mill would surely kick into gear. Shit. That was the last thing he needed.

The creek of the storm door drew his attention, causing him to refocus on the task at hand, which was to see his co-worker safely into her home and then get out of sight before anyone noticed him.

Natasha shifted through the keys on her keyring. Why did she have so many keys? In his mind, he grew impatient but held hope she wouldn’t notice. She was a nice lady, and his emotional problems weren’t her fault.

She tried the first key and it didn’t work. The next didn’t either.

Her fingers shook, and she glanced over her shoulder at him. “Sorry, I don’t remember the last time I had to key myself in. I should have grabbed the garage door opener from my car. That’s how I usually get in.”

“You don’t lock the door that goes from the garage to the house?” he asked. Didn’t she know how unsafe that was?

“Uh…no. I figure the overhead door is shut and that’s good enough.”

Her flush let him know she was embarrassed by her answer to his question. Thinking back, his tone had been a bit accusatory and now he wished he hadn’t said anything.

She refocused on the keyring, and in her attempt to select another key, the entire ensemble slipped from her hand and clinked against the cement.

Instinctively, he bent down to grab the keys. She did the same almost as quickly. Her fingers brushed over his. She pulled back like she’d touched a hot stove, catapulted into a standing position, and shuffled her feet to regain her balance. Her body went rigid.

He was still crouched down when their gazes met for the brief moment she allowed. Fear shot through her gaze. It was then he realized that something in her past had done a number on her. Her self-esteem was zero. Had she suffered abuse of some kind? Physical? Emotional? Who had done this to her? Her ex? Parents?

As to not rattle her any further, he rose slowly, selected the third key on the ring like she’d been attempting to do, slipped it into the slot, and unlocked the door.

“There you go,” he said as he handed her the overloaded keyring.

“Thanks,” she replied in not much more than a whisper.

“See you tomorrow,” he added as he spun to walk away.

He glanced over his shoulder. “Yes?”

“I really appreciate all your help tonight.”

This time, her emerald gaze stayed on him. The hint of longing in it jolted his heart and simultaneously sent a tsunami of guilt to crash over him, stealing the air from his lungs.

Jillian had been gone for nearly four years, and not once in all that time had that old familiar feeling of the heart surfaced. He swallowed hard. Until now.