Bookbub Deal of the Day!

I’ve got your Bookbub DEAL OF THE DAY!

PLAN INTERRUPTED is on SALE for $.99!

There’s more to some women than meets the eye…and it takes the right kind of man to unleash her secrets. 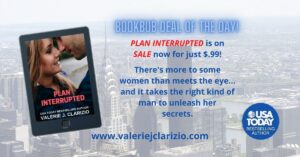 Elizabeth Shaw’s professional life is going according to plan until she meets the handsome widower and his two young children next door. Having shelved her personal life to land her dream job, she disregards her romantic feelings for him. But the forces of nature have other ideas for her.

Joe Antonetti has made his children his main focus since the death of his wife. But his beautiful neighbor becomes an irresistible distraction and has him wondering if he can change her priorities.

Surrendering to their attraction for each other causes another player to step in with his own plan for Elizabeth. One that could not only end the budding romance but her life as well.

Need some convincing?  Check out these reviews:

I am so pleased I was able to read and review this lovely novel. I rated it 5 stars because I really appreciated the depth of the characters and the many layers to their personalities. The secondary characters were just as multi-faceted as the hero and heroine. The story itself wasn’t a new premise, career focused woman, family centered widower, and the rocky road to love. What was fresh, was the author’s ability to bring out so many emotions in me while reading. I found myself fully invested in the hero and heroine’s happily ever after, and unable to put the book down until that occurrence!

I finished this book yesterday, and I’m still thinking about the characters today. Other reviewers have summarized the story, so I’ll point out that I absolutely loved the way Valerie portrayed Joe’s character and his tenderness as a father. Her ability to reflect the emotions of all her characters is excellent, and I couldn’t believe how many times I was moved to tears while reading the book. The story certainly isn’t typical, and I thoroughly enjoyed Plan Interrupted.

Elizabeth has a plan. A plan that doesn’t include a man. She wants to have her career on track, proving that she can be the person her parents aren’t convinced she can be. Her job transfers her from New York to a suburb of Chicago, where she buys a house and is on the fast track to upper management. She has had a pretty secluded life, never having celebrated things (even holidays), she is quite disappointed to be moving next door to a man with loud children. Joe is kind of put off by the woman that obviously has a stick up her butt. He just can’t stay away from the woman.

At first I was put off by Elizabeth. She is set on her plan and being number one at work that it’s an obsession. Even seeing her out with her friends, she never lets loose. Her dislike for the “noisy children” was a big of a barrier for me, but I hung on, hoping she would change her point of view. The neighbor, Joe, was just so tasty. He’s a great dad, always putting his children before anything. And the fact that he’s willing to help Elizabeth when needed, despite the tension between them, really makes him a stand-up guy. In addition to the romance, there is a bit of suspense in the second half of the story. A terrible thing happens to Elizabeth at a holiday party, and your heart just goes out to her. As her heart melts to the guy next door, your heart will melt for the story. Once you start reading, it’s hard to stop. Elizabeth does become a likable person, I promise, so don’t let the stick up her butt keep you from finishing this story. I recommend this for romantic suspense fans.